Our brains and bodies are complex — humans are still a fascinating mystery. For a perfect example, how about the placebo effect? Placebos are at the core of clinical trials, and using study placebos helps establish efficacy. Researchers are still trying to understand how and why placebos often produce a physical effect.

Here are five facts about this remarkable subject:

Placebo is an ancient term.

The word placebo isn’t medical jargon derived by a pharmaceutical company. In fact, it is an old Latin term that means “I shall please,” and it refers to flattering someone.

The first placebo was a simple wooden rod.

The first use of a placebo was in 1799 by British physician John Haygarth. At the time, a doctor named Elisha Perkins sold expensive metal rods he called Perkins tractors. Perkins claimed his simple devices pulled diseases out of the body, and they became popular. Haygarth demonstrated that the same “treatment” with simple wooden rods also showed effectiveness.

The first use of a study placebo in a clinical trial goes back 150+ years.

The first use of a trial placebo was in 1863. U.S. physician Austin Flint created the first clinical study comparing placebo to active treatment for rheumatism. His study placebo was an herbal extract. Austin reported: “This was given regularly and became well known in my wards as the ‘placeboic remedy’ for rheumatism. The favorable progress of the cases was such as to secure for the remedy generally the entire confidence of the patients.”

It appears placebos can work even when the patient knows he or she is receiving one. In several open-label placebo studies, patients’ symptoms did improve. More detailed studies are needed to fully understand this phenomenon.

The placebo effect can include side effects. 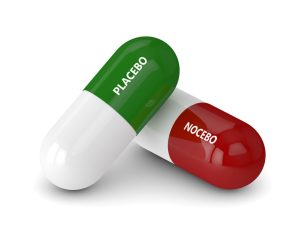 Enter the nocebo effect. Patients can experience a negative response if they are expecting one. For example, if patients are told by the study staff or in the patient materials that one of the possible side effects of a study drug is nausea, participants in the placebo group can experience this side effect. The nocebo has been called the evil twin of the placebo. In one chilling case, a participant in an antidepressant trial decided to overdose on the study drug. He swallowed 29 capsules and arrived at the hospital near death. After receiving life-saving treatments, he was unblinded and found to be in the study placebo arm. After getting this news, his vital signs returned to normal within 15 minutes.

A deep dive into the subject of placebos unveils a Pandora’s box of mysteries, opinions, and ethical questions. In clinical trials, the use of placebos can be a key factor in patient recruitment and retention. See Imogen Cheese’s blog here.

William is an Imperial Clinical Research Services medical writer based in Dallas, Texas. He is responsible for authoring print and digital clinical, marketing, and publicity documents including patient, physician, and site materials, as well as promotional pieces for Imperial. In addition to his heath care writing background, he has specialized in writing about aviation, entertainment, and the arts. He has a second life as a portrait photographer, and has exhibited his black and white portraits of people from all walks of life in galleries and museums throughout the U.S.

Effective Leadership: Work ON vs. Work IN the...

Decentralized Clinical Studies: What Does the Future Look...

Artificial Intelligence for Clinical Trials: Move Ahead, or...

The mind-body connection is a complex and fascinating inter-relationship. Being aware of this intricate connection, patients realize how their beliefs and thoughts can positively or negatively impact their physical health. As this is a mutual relationship, the reverse is also true. How we treat our physical health (by what we eat or how physically active we are) can also affect our mental wellbeing. In short, our mind is an extraordinary and powerful machine that can affect our health immensely!