Diversity in clinical trial participation emerged as one of the most important and impassioned topics presented and discussed during the SCOPE 22 Summit in Orlando, Florida. Covid, and its wide-ranging impact, served to reveal how different groups were differently affected, and it shed light on the potential effectiveness of treatment approaches across different groups.

One after another, speakers brought to light our industry’s inability to enroll participants that were representative of the full population the treatments will serve, and also the many challenges to overcoming that deficiency.

Perhaps lesser known, but equally important, is the issue of reporting in trade journals and public registries on race and ethnicity metrics of completed clinical trials. Although some improvement is occurring, it was made clear that there is a lack of consistent regulatory pressure, incentive, and legislative teeth to force the issue on both the enrollment diversity and reporting fronts.

Progress is being made

It wasn’t all bad news. Speakers discussed strategies and tactics that have improved diversity in trials and highlighted approaches to consider for the future.

These presentations were driven by passion and facts. One memorable session was presented by Kimberly Richardson, founder of the Black Cancer Collaborative, and a strong advocate for patients and research, and Ryan Nguyen, DO, chief fellow, hematology and oncology, University of Illinois Cancer Center.

We learned some harsh facts on the current condition of diversity in clinical trials. Here are a few of the notes I captured during their important presentation:

Kimberly and Ryan also discussed efforts that have been made to improve minority consideration of clinical trials and representation in those trials. These included, but were not limited to, the following actions and observations:

Adrelia and Lynne shared examples of steps they took, from planning to execution, to improve the likelihood of success. For example, they created a site list and used epidemiology to ensure they were choosing locations where the target patient population actually exits. They started planning as soon as the protocol was in place. They used centers of excellence and got feedback in advance – discussing potential operational challenges with the protocol, as well as protocol feasibility.

During the validation phase, sites gave feedback on their ability to enroll diverse populations. They used databanks and created heat maps to ensure gender representation.

When it came to specific tactics, they designed and deployed materials that reflected diversity. Covid put the spotlight on the importance of diversity and they used technology to take smart approaches to reaching those populations and easing the burden of participation.

In yet another talk on this important subject, Audrey Escobedo-Escotto, MD, MPH, research director at Emerson Clinical Research Institute, discussed the importance of considering diversity in protocol design from a site’s perspective. She called out the missteps often taken by sponsors in the design of the protocol as it relates to what will work at sites with underserved, diverse patient populations. Her talk included practical recommendations on achieving equity (her suggested term) in enrollment. 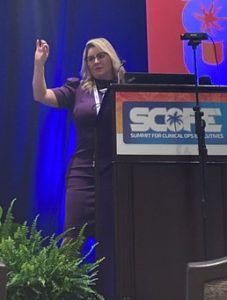 How does diversity play into another hot SCOPE 22 topic, decentralized trials? While decentralized trials have been given rocket fuel during the pandemic, their often technology-based approaches were called out with a cautionary tone by speakers who highlighted the gaps in adoption of such technologies across diverse groups.

Many practical approaches can be taken to engage with these communities and capture their feedback. This includes involving diverse health care professionals who are trusted by and treat underserved patients, and being intentional about diversity in each stage of the study planning, execution and reporting process.

Diversity was a refreshing and critically important topic woven throughout the broader functional areas that SCOPE covers as part of its annual curriculum. I’m looking forward to the advances we will make this year, and the sharing of good news at SCOPE 23.

Getting Back Out There: SCOPE 22 Summit Unites Colleagues

Patient Engagement in the Evolving World of Clinical...

Getting Back Out There: SCOPE 22 Summit Unites...

OECT-Canada Virtual Conference Not as Remote as Expected

Bridging the Gaps in Study Conduct