An Evening with HBA’s Woman of the Year, Dr. Annalisa Jenkins

On the evening of September 18, 2014, I attended the Healthcare Business Women’s Association’s (HBA’s) Woman of the Year event in Chicago and had the pleasure of meeting Dr. Annalisa Jenkins, CEO of Dimension Therapeutics. Every year, the HBA elects one woman as the HBA Woman of the Year, and Dr. Jenkins is this year’s honoree.

The Healthcare Business Women’s Association is a national professional development organization that I have been a member of for over a year.  The HBA does an excellent job uniting women in various areas of the healthcare industry, including pharmaceutical, biotechnology, hospitals, etc. The association organizes monthly events, allowing its members to hear from various industry thought leaders and be a part of discussions on current industry trends and innovative ideas.

Dr. Jenkins’ remarkable 30-year career began in London, where she studied at the Medical College of Bartholomew’s Hospital.  She was the first female ever to be accepted into the British Royal Navy and, at the time of her acceptance, she was the Navy’s only female medical officer in active service. Her career continued after she left the service to commence specialist training in cardiology, later becoming a cardiologist. She joined Bristol-Myers Squibb (BMS), where she served for 14 years in various positions, most recently as vice president of research and development. After leaving BMS to become executive vice president and global head of research and development at Merck Serono, she relocated to Germany.

Last Thursday, Dr. Jenkins captivated a room of over 300 women without the help of any slides or notes.  Anyone who has ever had to stand up and speak in front of a crowd knows exactly how difficult that is. She not only had the full, undivided attention of every single woman in the room but, at the end, there was a line of women waiting to introduce themselves to her. 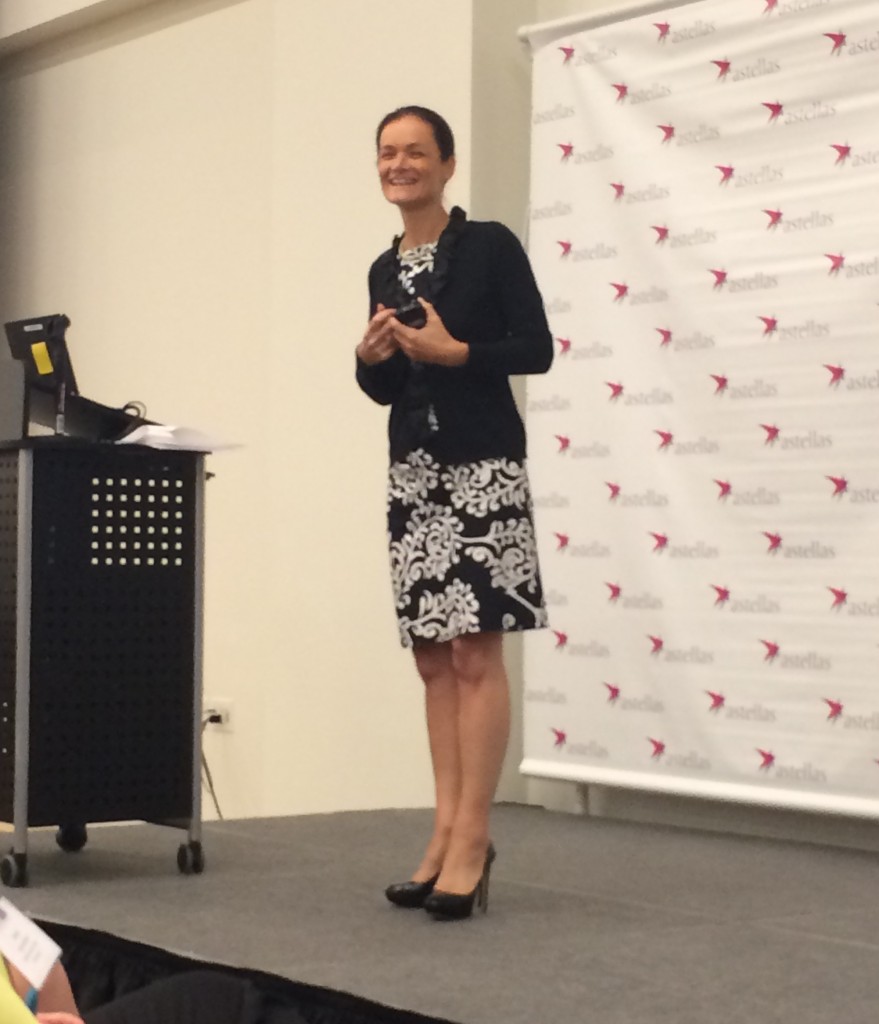 Dr. Annalisa Jenkins, CEO of Dimension Therapeutics, addresses over 300 members of the Healthcare Business Women’s Association as the organization’s HBA Woman of the Year.

Despite her tremendous accomplishments, the story she shared with the women of the HBA was as much about her journey as it was about the mentors who were a part of her journey – the colleagues and leaders who supported her throughout her career.

She focused on leadership, traits of a great leader, and illuminated the difference between leading versus managing.  To her, the most important trait of a leader is how he or she treats the lowest ranked employees of their organization because they are just as important, if not moreso, than the highest ranked executives.

An example that made a great impact in the room was that while her career was continually advancing, she became the boss of one of her former bosses. However, this individual continued to be her biggest advocate because he saw her accomplishment as his own.  According to Dr. Jenkins, this is an example of a great leader – one who encourages his or her employees to move forward, even if it means surpassing them.

She concluded her remarks providing what are, according to her, the 5 Es and 5 Cs of leadership:

Having met Dr. Jenkins and heard her story firsthand, I am inspired not only to become a leader in every aspect of my life, but to continue to grow as a professional woman in the industry.

HBA has chapters all over the United States, so if you are looking to be inspired and make some great connections, I strongly encourage you to join me and so many others and attend an HBA event.

For more information, please visit the HBA national page here. If you are in the Chicago area, visit for a list of all upcoming events!

Hope is director of project operations, Imperial Clinical Research Services. She has been with Imperial since 2007, and started as a project manager. In her current role, she leads a team of 11 project managers and coordinators to provide production, procurement, assembly, and logistics services for client study materials in support of global clinical trials. She also oversees client interaction, workload management, work processes and improvements, and revenue growth through customer service and relationship development efforts.

Too Many Cooks in the Kitchen Causes Fires

Decentralized Clinical Studies: What Does the Future Look...

Artificial Intelligence for Clinical Trials: Move Ahead, or...

Patient Engagement in the Evolving World of Clinical...